This repository contains a collection of many datasets used for various Optical Music Recognition tasks, including staff-line detection and removal, training of Convolutional Neuronal Networks (CNNs) or validating existing systems by comparing your system with a known ground-truth.

Note that most datasets have been developed by researchers and using their dataset requires accepting a certain license and/or citing their respective publications, as indicated for each dataset. Most datasets link to the official website, where you can download the dataset.

If you are interested in Optical Music Recognition research, you can find a curated bibliography at https://omr-research.github.io/.

The following datasets are referenced from this repository:

If you find mistakes or know of any relevant datasets, that are missing in this list, please open an issue or directly file a pull request.

Tools for working with the datasets

A collection of tools that simplify the downloading and handling of datasets used for Optical Music Recognition (OMR). These tools are available as Python package omrdatasettools on PyPi.

Summary: The Handwritten Online Musical Symbols (HOMUS) dataset is a reference corpus with around 15000 samples for research on the recognition of online handwritten music notation. For each sample, the individual strokes that the musicians wrote on a Samsung Tablet using a stylus were recorded and can be used in online and offline scenarios.

Remarks: The original dataset contains around 20 artifacts and misclassifications that were reported to the authors and corrected by Alexander Pacha.

Summary: A collection of various other datasets which combines 7 datasets into a large unified dataset of 90000 tiny music symbol images from 79 classes that can be used to train a universal music symbol classifier. 74000 symbols are handwritten and 16000 are printed symbols.

Summary: The CVC-MUSCIMA database contains handwritten music score images, which has been specially designed for writer identification and staff removal tasks. The database contains 1,000 music sheets written by 50 different musicians. All of them are adult musicians, in order to ensure that they have their own characteristic handwriting style. Each writer has transcribed the same 20 music pages, using the same pen and the same kind of music paper (with printed staff lines). The set of the 20 selected music sheets contains music scores for solo instruments and music scores for choir and orchestra. 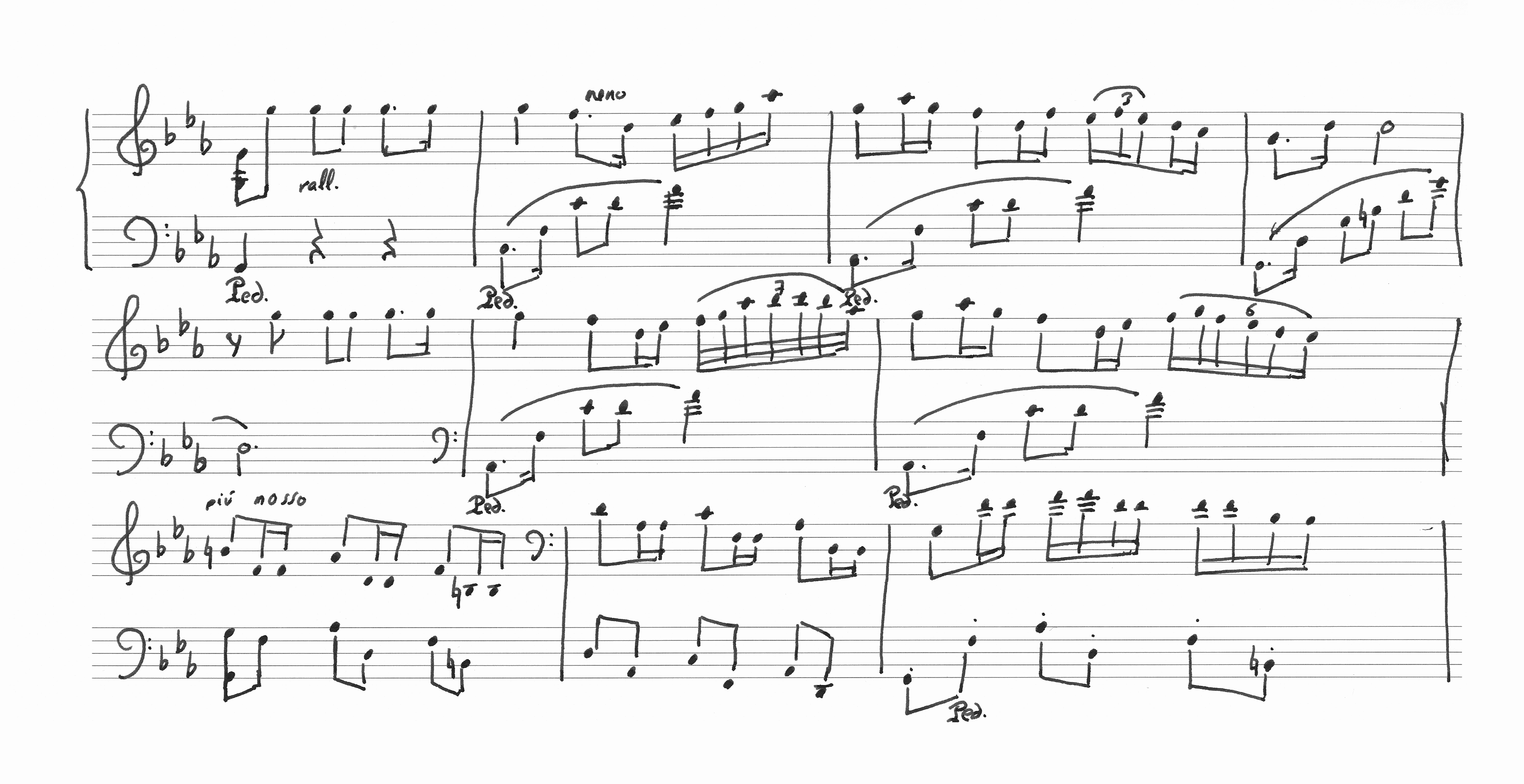 Summary: MUSCIMA++ is a dataset of handwritten music notation for musical symbol detection that is based on the MUSCIMA dataset. It contains 91255 symbols, consisting of both notation primitives and higher-level notation objects, such as key signatures or time signatures. There are 23352 notes in the dataset, of which 21356 have a full notehead, 1648 have an empty notehead, and 348 are grace notes. Composite objects, such as notes, are captured through explicitly annotated relationships of the notation primitives (noteheads, stems, beams…). This way, the annotation provides an explicit bridge between the low-level and high-level symbols described in Optical Music Recognition literature. 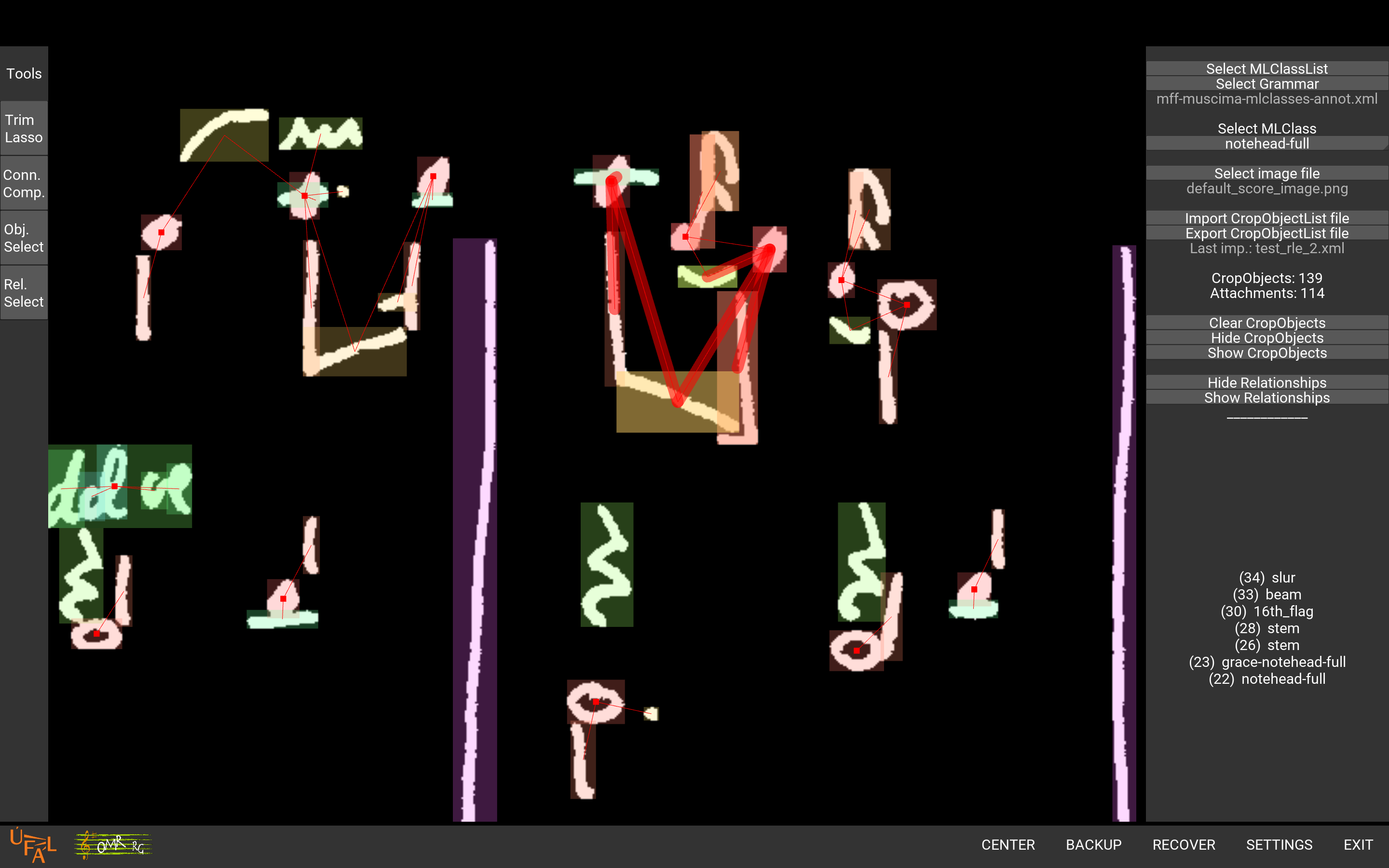 Summary: Based on the MUSCIMA++ dataset, a subset of the annotations was constructed, that contains only annotations for measure and stave recognition. The dataset has some errors fixed that version MUSCIMA++ 1.0 exhibits and comes in a plain JSON format, as well as in the COCO format.

This dataset was created by Alexander Pacha and can be directly downloaded from here. 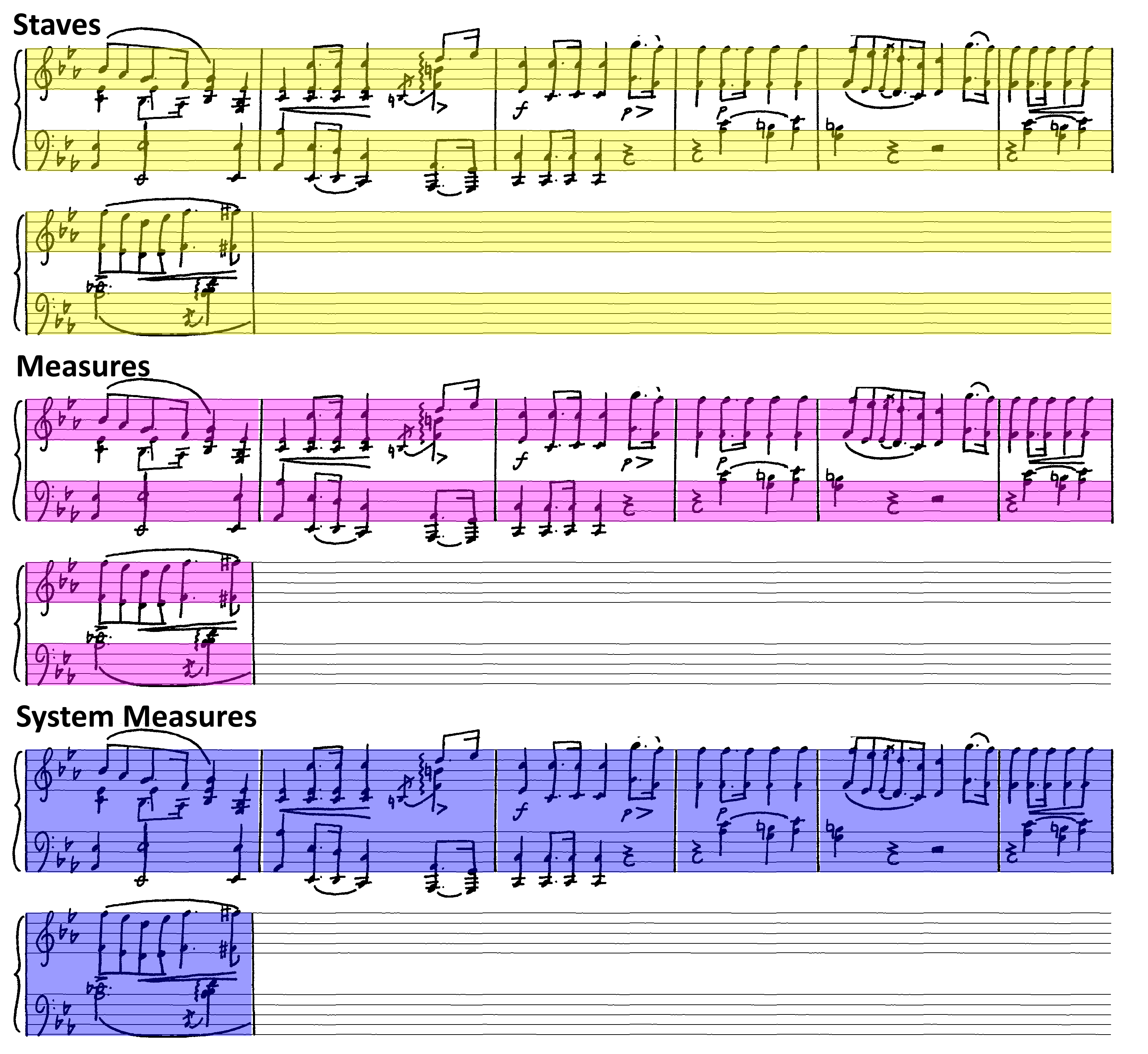 Summary: Synthetic dataset of 300000 annotated images of written music for object classification, semantic segmentation and object detection. Based on a large set of MusicXML documents that were obtained from MuseScore, a sophisticated pipeline is used to convert the source into LilyPond files, for which LilyPond is used to engrave and annotate the images. Images are rendered in five different fonts to create a variation of the visual appearance. 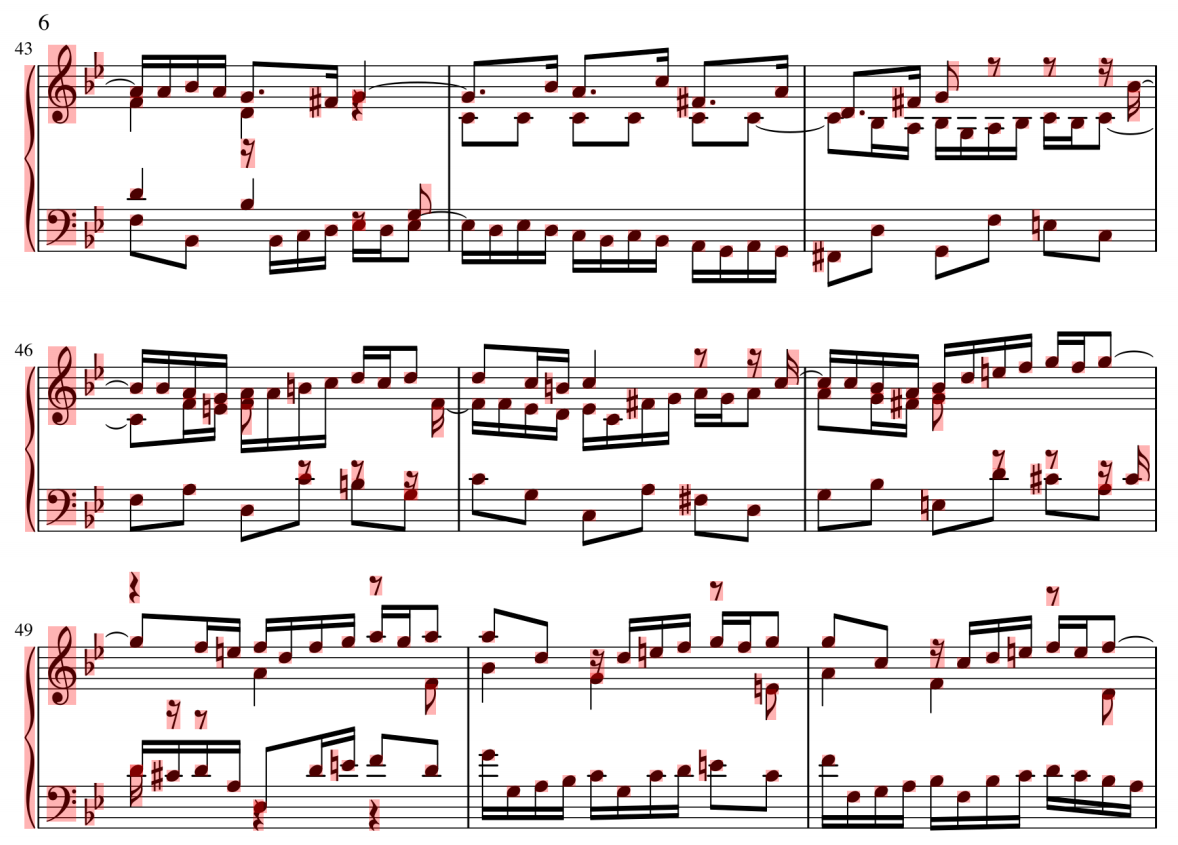 Summary: The Printed Images of Music Staves (PrIMuS) contains the 87678 real-music incipits (an incipit is a sequence of notes, typically the first ones, used for identifying a melody or musical work) in five different formats: As rendered PNG image, as MIDI-file, as MEI-file and as two custom encodings (semantic encoding and agnostic encoding). The incipits are originally taken from the RISM dataset.

PrIMuS has been extended into the Camera-PrIMuS dataset that contains the same scores, but the images have been distorted to simulate imperfections introduced by taking pictures of sheet music in a real scenario.

Summary: The Single Stave dataset by Arnau Baró is a derived dataset from the CVC-MUSCIMA dataset and contains 95 single stave music scores with ground truth labels on the symbol level.

Summary: MSMD is a synthetic dataset of 497 pieces of (classical) music that contains both audio and score representations of the pieces aligned at a fine-grained level (344,742 pairs of noteheads aligned to their audio/MIDI counterpart). It can be used for training and evaluating multimodal models that enable crossing from one modality to the other, such as retrieving sheet music using recordings or following a performance in the score image.

Summary: This dataset contains the scores for 200 music pieces along with their MIDI representation and query images with they ground-truth alignment. 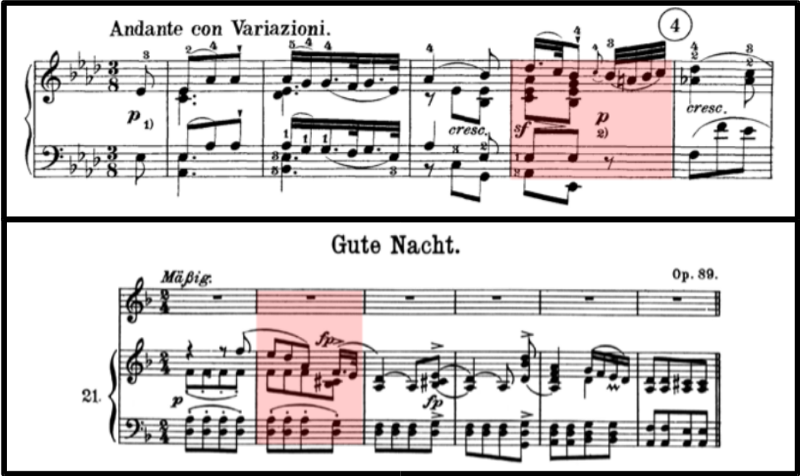 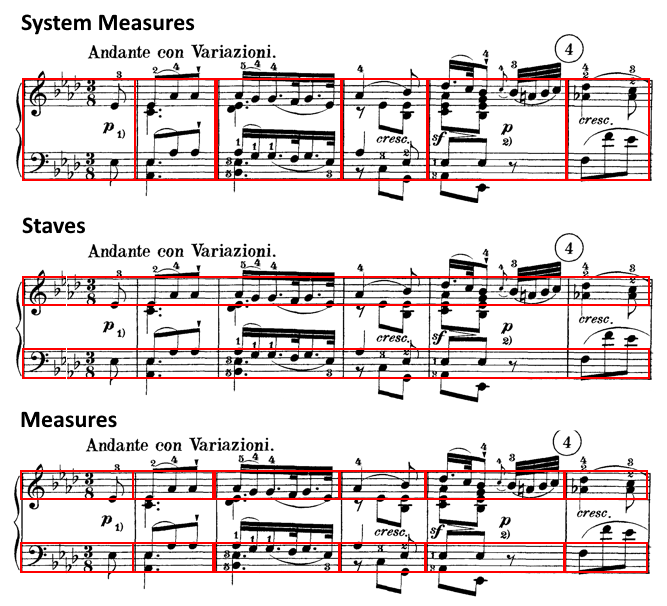 Summary: MuseScore is a free music notation software and also allows their users to upload their sheet music to their website and share it with others. Currently (Jan. 2018) the website hosts over 340000 music sheets, that can be downloaded as MuseScore file (mscz), PDF, MusicXML, MIDI and MP3. 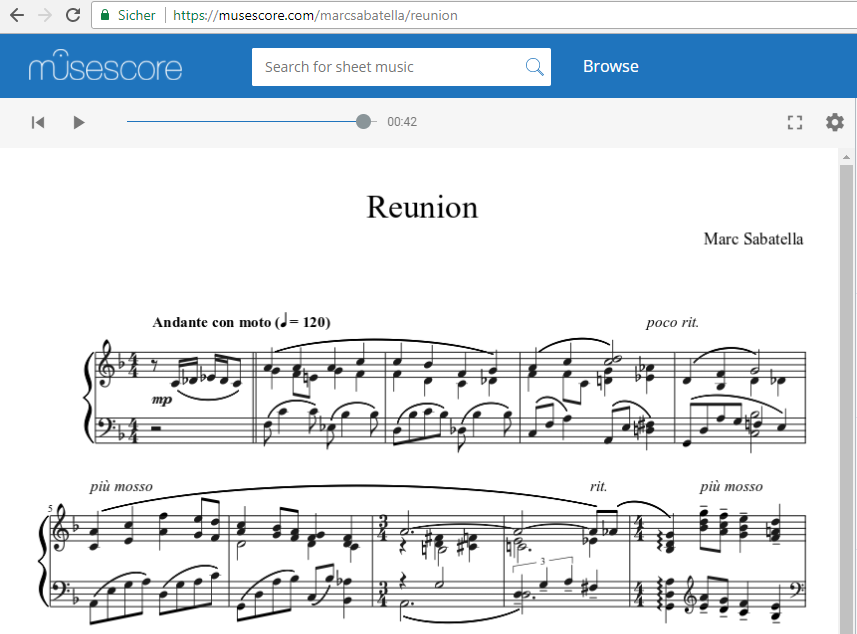 Summary: This dataset contains the IDs to 17000 monophonic scores, that can be downloaded from musescore.com. A sample script is given that downloads one score, given you’ve obtained a developer key from the MuseScore developers.

Summary: A corpus collected by an electronic pen while tracing isolated music symbols from Early manuscripts. The dataset contains information of both the sequence followed by the pen and the patch of the source under the tracing itself. In total it contains 10230 samples unevenly spread over 30 classes. Each symbol is described as stroke (capitan stroke) and including the piece of score below it (capitan score).

Summary: The SEILS dataset is a corpus of scores in lilypond, music XML, MIDI, Finale, **kern, MEI, **mens, agnostic, semantic and pdf formats, in white mensural and modern notation. The transcribed scores have been taken from the 16th century anthology of Italian madrigals Il Lauro Secco, published for the first time in 1582 by Vittorio Baldini in Ferrara (Italy). The corpus contains scores of 30 different madrigals for five unaccompanied voices composed by a variety of composers. 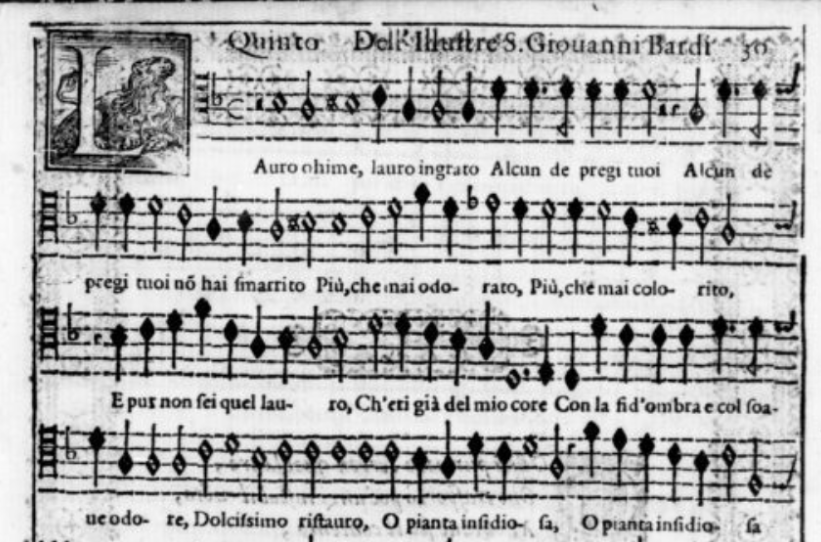 Remarks: The dataset is usually only available upon request, but with written permission of Ana Rebelo I hereby make the datasets available under a permissive CC-BY-SA license, which allows you to use it freely given you properly mention her work by citing the above mentioned publication: Download the dataset.

Summary: A dataset of 2955 small black and white images of accidentals (flat, natural, sharp) in context, including 968 images without accidentals (reject class). Annotations are included into the filename such as {composer}-{page number}_{accidental class}_{window box}_{accidental box}_{note head box}.jpg with the boxes containing absolute coordinates, relative to the original music score page in the format: {left}x{top}x{right}x{bottom}. 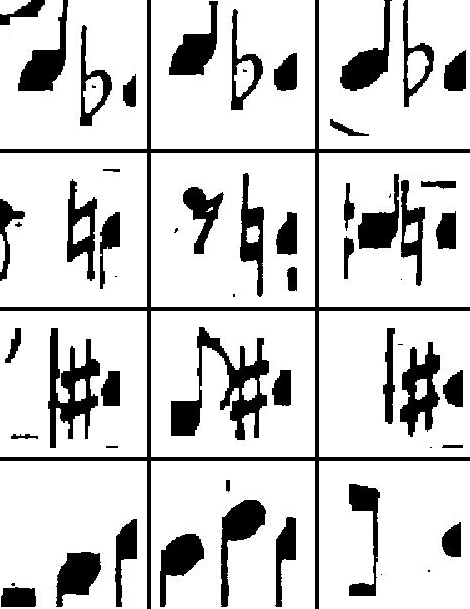 Summary: A collection of four music sheets with approximately 800 annotated music symbols. The DeepScore project in cooperation with the ZHAW targets towards automatically generating these images and the annotations from MuseScore or Lilypond documents.

Summary: A small dataset of about 200 printed music symbols out of 36 different classes. Partially with their context (staff-lines, other symbols) and partially isolated.

Summary: A dataset of 2000 images, containing 1000 images of music scores and 1000 images of other objects including text documents. The images were taken with a smartphone camera from various angles and different lighting conditions.

Summary: A dataset of 706 symbols (g-clef, f-clef) and symbol primitives (note-heads, stems with flags, beams) of 16 classes created by Arnaud F. Desaedeleer as part of his master thesis to train artificial neural networks.

Summary: The Synthetic Score Database by Christoph Dalitz that contains 32 scores that have been computer generated with different music typesetting programs. It contains ground truth data and is suitable for the deformations implemented in the toolkit.

Summary: 240 pages of early typographic music having a total of 1478 staves and 52178 characters corresponding to 175 different symbols with ground-truth obtained by manually entering via a MIDI keyboard.

Summary: Dataset of 12600 trajectories of handwritten music symbols, drawn by 50 writers with an Android application. Every writer drew each of the 84 different symbols three times.

Summary: The Petrucci Music Library is the largest collection of public domain music, with over 420000 (Jan. 2018) freely available PDF scores by almost 16000 composers accompanied by almost 50000 recordings. It also maintains an extensive list of other music score websites, where you can find many more music sheets, e.g. collected during research projects by universities. 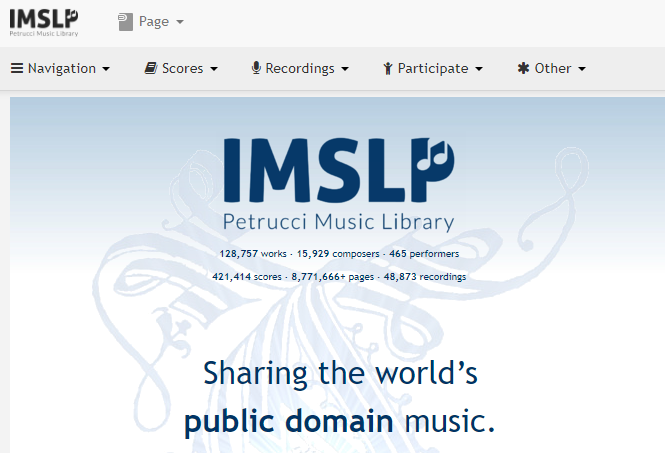 (Authors want to be contacted) 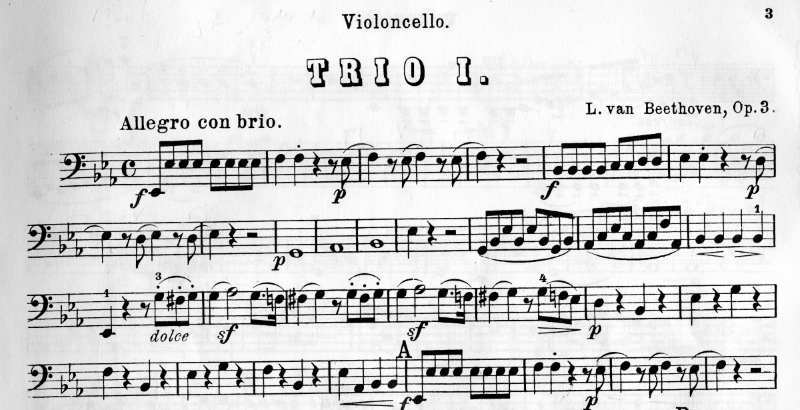